An advert for Thai Life Insurance called ‘Silence of Love’ featuring a deaf Dad has become a hit on YouTube with well over a million views. This article on The Huffington Post described it as being “poignant,” but on first viewing, I thought must be watching a parody.

The film (spoiler alert) is about a father whose daughter becomes ashamed of him because he uses sign language. After she attempts to commit suicide, he dies trying to save her. All of which is a great mechanism for selling some life insurance, obviously.

The film tugs on every possible heartstring in order to make everyone who sees it (non-deaf at least) feel sorry for the Dad, burst into tears due to his sacrifice at the end, before buying some cover – presumably in case they start using sign language, then have a child who grows up to feel deeply ashamed of them before trying to kill themselves. 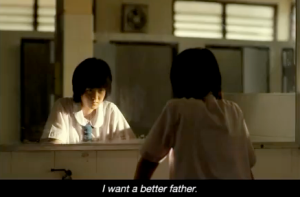 The ad begins with the daughter looking in the mirror thinking to herself ‘I want a better father… someone who’s not deaf-mute.’ No, I’m not making it up. She really thinks this. Mad to think that when I was a pup, I just wanted a Sega Mega-Drive.

We then see the daughter getting bullied at school (for having a ‘Deaf Dumb Dad’). Then, on the evening of her birthday, as her father sits waiting at a table in front of her cake, she tries to kill herself. He’s alerted when he feels the thump of her body falling to the ground in the bathroom.

In hospital she is rushed along on a stretcher, as we see flashbacks of the Dad doing GOOD THINGS. Just in case we didn’t know how good he was already.

A montage shows him telling his daughter to eat her greens, be good at school, and even (as he waits with her birthday cake) apologising for not being like other Dads. “I was born a deaf mute,” he says.  “I can’t speak like other fathers. But I want you to know that I love with all my heart.”

Back in A&E, HERO DEAF DAD (as he will now be known) then begs a doctor to “Take my blood!” It’s a good move. His blood saves his daughter, and, conscious again, her hand reaches out for his. Alas, HERO DEAF DAD has flatlined (from giving too much blood?!) and dies.

That’s clearly the most appropriate moment for the words ‘Thai Life Insurance’ to pop up on screen. HERO DEAF DAD may be dead, but his daughter will be taken care of. And that’s what counts, right? 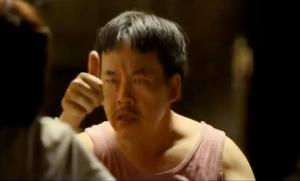 What made me squirm is how HERO DEAF DAD is presented throughout – in a very cartooney way. Obviously he communicates visually, but his signs and expressions seem particularly exaggerated (that said, I’m no expert on Thai Sign Language). Strangely, for a deaf person, he seems unaware that his daughter keeps looking at him with an angry stare, until that fateful birthday.

What really bites is the final voiceover which says: ‘There are no perfect fathers. But a father will always love perfectly. Remember to care for those who care for you.’

Hold on… ‘no perfect fathers’? He seems pretty perfect to me. He’s even made the ultimate sacrifice for his kin. Ah I see. Something makes him imperfect… what could that be?

The agency who made it have a bit of form. They made an ad called Melody of Life featuring kids with a range of disabilities (Also for Thai Life Insurance) that won a few awards several years ago.

Perhaps coming up with the character of HERO DEAF DAD was the logical next step for them.