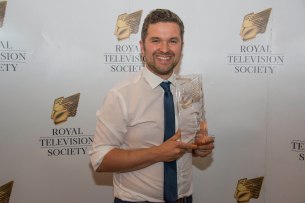 I’m an RTS award-winning screenwriter, director and journalist. I make ground-breaking dramas, comedies and documentaries, often with Deaf people and sign language at their heart.

I’ve recently written for Casualty, Eastenders, CBBC, BSL Zone and am currently writing a special one-off drama for BBC1. My most recent writing credit is Two Deaf Yorkshiremen in Lockdown, a comedy written and filmed during the summer of 2020.

The Casualty episode I co-wrote has been nominated for a Rose D’Or and was broadcast in July 2020 (read a BBC Writersroom blog here). The episode is about the effects of deafness on three generations of a family, and follows nurse Jade on the day she meets her birth mother for the first time. The episode was groundbreaking for featuring five deaf creatives in key roles, including two actors, two writers and the director.

I’ve also been working as a Story Consultant with Eastenders, having pitched an ongoing storyline where Eastenders’s Ben Mitchell loses his hearing, leading to the introduction of of Frankie, the show’s first signing deaf character. I fed back on story documents and scripts for the storyline and worked on the groundbreaking special ‘silent’ episode filmed from Ben’s point of view which was broadcast in early June 2020. (read a BBC Writersroom blog about my work on the show here). 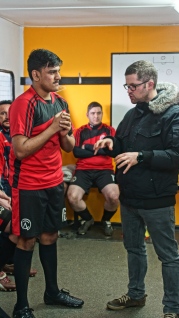 My creations as a writer director include the innovative 6-part BSL comedy sketch show Deaf Funny, winner of the RTS Yorkshire Writer award 2018 and Best TV Programme at Deafest 2019. I also created and directed the five-part Found documentaries about deaf identity, the Four Deaf Yorkshiremen comedies, and hit short film The Kiss.

As a screenwriter, I created and wrote the award-winning half hour TV dramas My Song and Departure Lounge, rude mockumentary Hands Solo, the TV mini-series The Fingerspellers and YouTube viral hit Coming Out. I also wrote a short film for the NSPCC which has clocked up over 1 million views online, and several other charity shorts.

As a journalist, I’ve written for the Guardian, Mirror and BBC Online, as well as many others. I am the editor of the world’s most popular Deaf blog, The Limping Chicken, which has clocked up over 6 million views and posted blogs by over 400 Deaf people since 2012. Shortly after starting the site, I broke the 2013 worldwide news story about the fake interpreter at Nelson Mandela’s memorial service.