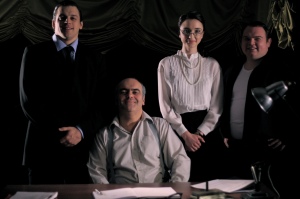 Two things that happened in quick succession this week made me write this post.

First, director William Mager won a prestigious AMI award on Sunday night (meeting the legendary Mike Leigh shortly afterwards), and second, our comedy The Fingerspellers (which I wrote and William directed) got another airing on digital TV a few hours later on Monday morning.

The Fingerspellers is a comedy mini-series about a family of deaf gangsters, who protect themselves with their signing hands (instead of bullets!). When another family called the Operas threaten to take over their patch, a war ensues…

It’s very very silly – The Fingerspellers was influenced by madcap comedies like Airplane and The Naked Gun and also by mafia films and TV shows like The Godfather, and The Sopranos. It’s more than silly – it’s ridiculous, but it was the most fun set I’ve worked on (I even played a small part in the first episode, spot me if you can!) and it also features some of the best deaf acting talent the UK has to offer.

The version that got shown on Monday morning is an omnibus of the eight episodes that made up the series. They were shown within the BSLBT series Wicked (made by Remark, who supported the production). As Harry Hill might say, I like the series, and I like the omnibus. FIIIIGGGGHHT!

For me, the series wins. The main reason being – there’s more material (because some footage had to be edited to fit within the half hour slot for the longer version) and as a result there’s also more pauses, a bit more breathing space between the gags and the fingerspelling shootouts (!). There’s also more silly episode titles, crazy final credits (thanks to animator James Merry) and over-dramatic music. So here, below, if you’ve not seen them, are those eight episodes. Enjoy.