Ok, ok. So we’ve had our fun. In going viral, ‘Chickengate’ has expanded from a mere few seconds on BBC3’s Deaf Teens: Hearing World to inspire numerous gags on Twitter, hundreds of Facebook comments, and now, amazingly, a handful of tribute videos. A four year old girl even made the “my chicken is ill’ excuse on a Facebook video yesterday, and ‘Chickengate’ has duly been honoured with its own (admittedly rather clever) Downfall parody.

I still can’t stop laughing at the moment when Sara was told by her notetaker that she couldn’t stay for the whole two-hour lecture because her chicken was visiting the vet. Clearly I’m not alone.

But then, yesterday, something made me think again. Deaf actress Emily Howlett posted this tweet: “Can we all leave the poor note-taker alone now? We need these people to help us. Might be better not to shit all over them for doing so.”

At first, I argued back. I told Emily that she had a point, but that the reaction wasn’t cruel, it wasn’t aimed against the notetaker, but was simply one of those rare moments when the whole deaf world found itself laughing at the same thing. A funny excuse that became our version of Simon Cowell’s high trousers, Ricky Gervais dying (comedically) on stage during Live 8, or the bridesmaid who was grumpy during the Royal Wedding. The ‘chicken is ill’ joke was something that us deafies all understood, that we could all share. That bonded us together.

Then, through Twitter, Emily pointed out a few things. Like the fact the notetaker “was only booked for the hour, it’s not like she was booked and walked out before time up…” and that it wasn’t “worth the backlash the poor woman got for being honest.”

It got me thinking. There’s a person out there who’s probably wondering what she ever did to deserve this.

I don’t know much about Sara’s notetaker, but there are two things we can glean from the small amount of footage in the film. One: she cares about animals. Two: she works to support deaf students. Those are two things right there, that indicate, with high probability, that she may well be a pretty good egg.

When I think about it, if Sara’s notetaker is guilty of anything, then first, it’s of caring too much about her chicken. So much that when said chicken developed a limp, she didn’t decide it was a good time to plan a Sunday roast, she chose to try and help it get better. The vet fees alone must have cost more than simply murdering her chicken and replacing it with a new one. She must have really loved that chicken.

The other thing she was guilty of (as Emily pointed out) was being honest. Too honest. Think about it. She’s providing support for a student who is being filmed for a documentary. She walks up to her before her first lecture and there’s a camera filming their whole conversation. She suddenly finds out that the student’s lecture is two hours long. She can only stay for the first hour. Amazingly, she decides to tell the truth about why she has to go.

How many people, faced with the same circumstances, would make up a story here? A little white lie? How many people with a camera at their side and a disappointed student staring them in the eye would fib that they had an urgent doctor’s appointment of their own, or that their Grandmother was terminally ill, or that there was some kind of urgent flight out of the country they had to make? How many people would choose, as Sara’s notetaker did, to simply be honest, however ridiculous they might sound, and say those immortal words: “I have a problem. My chicken is ill.”

If that’s not enough for you, here’s one final reason why I think Sara’s notetaker is a good sort. Her job is writing down a summary of what’s said during a lecture for deaf students. She’s not an interpreter. Yet – and let’s not underestimate the significance of this – she has taken it upon herself to learn enough sign language to enable her to communicate easily with a deaf student. She doesn’t need to do this – she could probably get by writing notes to them on a piece of paper at the beginning and end of lectures. But somewhere along the line, she’s chosen to go the extra mile. For deaf people.

That’s why I think we’ve read ‘Chickengate’ all wrong. Rather than being vilified for a split second in her life, I think we should rally round Sara’s notetaker. She’s suffered for nothing more than being a good, honest, genuine person, and rather than continuing to laugh at her for nothing more than a moment in her life, we should instead all give her a big old deaf hug and wish that there were more people out there like her. People that care about their chickens and their deaf students, no matter the circumstances. On reflection, Sara’s notetaker, you are my hero. 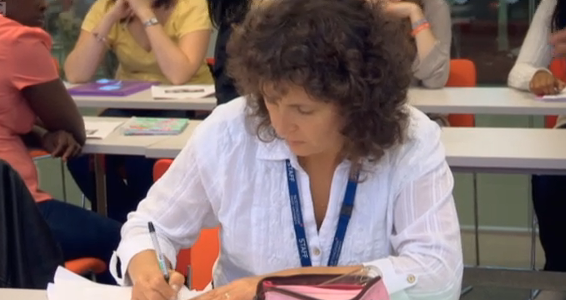