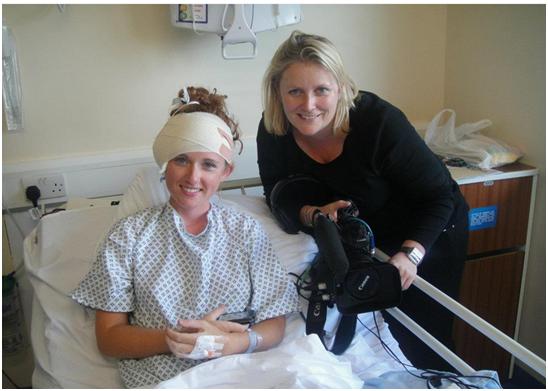 First published in the February 2012 edition of the Hearing Times.

Claire (pictured right, with Meghan after her cochlear implant operation) has worked in TV for eight years, starting off in wildlife documentaries before moving into filming people instead. After working on programmes about children in care, she worked on medical series like 24 hours in A&E and went on to film in Africa. Deaf Teens: Hearing World is the first one hour programme she has directed.

Where did the idea for Deaf Teens: Hearing World come from?
My Dad is becoming deaf and he said that it makes people instantly assume you are a bit daft, so I wondered if this was even worse for young deaf people. Once I had spent the day at a deaf school, I decided that they had plenty to say and there was so much to learn about their experiences of being deaf and the deaf community. I wanted to know what it was like to be a deaf teenager – were the rules of engagement different – do deaf people only date other deaf people? What’s it like to go to uni when you can’t hear any potential friends? How is it going from a fully deaf school in to the hearing world?

How did you get the film commissioned?
This film is part of the Fresh strand on BBC3, which is an opportunity for relatively new directors to make their first one hour programme. It is a great opportunity to work on a programme that you have come up with – I pitched the idea to the BBC executives, then literally worked on it from start to finish.

How did you deal with communication during filming?
In a variety of ways. Christianah and Meghan used speech so I just conversed with them directly. They are masters of lip-reading and as long as I remembered to take the camera away from my face before I spoke, faced them and didn’t mumble we got along fine! Jake and I could converse to a certain extent with the help of his family and on one occasion we used an interpreter. With Sara and Asher, who are BSL users, I had an interpreter for just about all the filming with them.

Were your perceptions of deaf people changed by making the film?
I was amazed at how important deaf identity is – most of the young people seem to find such solace in being with other deaf people and it seems like an amazing ‘club’ to be involved in. Their culture is very attractive, it is a friendly, warm, tactile culture with a beautiful language at the heart of it and many brilliant people who just see the world in a very slightly different way from me. I am fairly sure it is this ‘club’ or culture which makes most of the deaf people I spoke to say that they wouldn’t become hearing, even given the choice.

What did you learn about their families?
I think there is a huge difference between being born to deaf parents or hearing parents. I was surprised to find out that 90% of deaf children are born to hearing parents. I was really impressed by how the parents of one of the boys in the film, Jake, who are hearing, had managed to learn sign language and had made such a tremendous effort to connect Jake with so many other deaf young people. It must be a minefield for hearing parents initially in how to communicate with your child but not deny them their deaf identity.

You caught these young people at a certain stage in their lives – just as they’re going through big changes, moving away from home, becoming an adult and so on – how do you feel being deaf changed their experience?
All the contributors had a different experience of moving into the big wide world. I think moving from a deaf school or a place where you have lots of deaf support in to a mainstream university is incredibly hard. How do you make friends when you have an interpreter and a notetaker in tow? It is incredibly hard, as Sara found out when she set off for uni. I think all my contributors in the film had real balls and were utterly inspiring, I think they will all ultimately make real successes of themselves even if it doesn’t happen straight away for all of them.

How do you feel about the final film and would you like to revisit the contributors a few years down the line?
I am pleased with the final film, I am very happy that the contributors and the National Deaf Children’s Society like the film and feel it represents young deaf people fairly. I felt a big responsibility in making a film about such a strong-minded culture especially as I wasn’t part of it. The five young people in the film are so engaging and I think they offer a real insight in to the experience of being deaf. If the BBC is interested in a follow-up I will be there!

Deaf Teen: Hearing World will be broadcast on BBC3 at 9pm on Monday 6th February, – click here to watch the sign interpreted version of the programme on iPlayer.