“Imagine serving decades in prison for a crime your sibling framed you for. Now imagine doing it while profoundly deaf.” 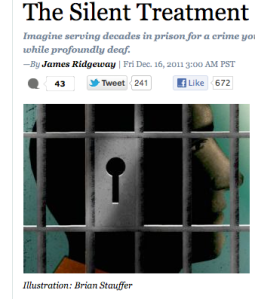 An incredible article by investigative journalist James Ridgeway for America’s Mother Jones magazine uncovers the story of Felix Garcia, a profoundly deaf Cuban American who was imprisoned in 1983 for a crime his brother has since confessed to.

Garcia, from Florida, has so far spent nearly thirty years of his life behind bars. Ridgeway uncovers not only the vulnerability of a deaf prisoner (Garcia has been “ignored or taunted by guards, raped and brutalized by other prisoners” he writes) but also how little Garcia understood of the original court case which determined his fate.

Ridgeway writes that Garcia “was given a hearing aid, which he said didn’t work, and a loudspeaker, which amplified noise but didn’t help him understand what people were saying. He tried to read lips, but the prosecutor often faced away from him, and he had no clear view of the witness box. In other words, he was largely clueless as to what was going on.” Garcia told the paralegal called Pat Bliss who has supported his case since 1996 that the reason he answered “yes” to so many questions in court was because he didn’t want to look “stupid.”

It transpires that Garcia’s brother made a deal with the authorities in order to avoid the death penalty. Over twenty years later, he admitted in court that his brother had nothing to do with the original crime, but despite this, Garcia remains in prison.

Having been punished for a crime he did not commit, Garcia then faced what could be described as a double sentence (which is also, as it happens, the name of a play by Deafinitely Theatre about a deaf prisoner) of being a prisoner in a system that made no provision for deafness.

Ridgeway uncovers how US prisons have no records of how many deaf prisoners there are, and how legislation for people with disabilities is routinely ignored, which leaves deaf prisoners completely powerless and excluded – without access to training that could help them prepare for a life outside, general information (simple things such as calling out mealtimes) or entertainment (televisions without captions, for example). That’s without mentioning the brutal treatment they can face.

Much of what Ridgeway outlines in the article is also true here in the UK.

In 2007, I worked on a BBC2 special for the deaf programme See Hear about deaf prisoners. We worked with The Deaf Prison Project to research our programme, and were surprised to find (like in the US) that that there were no statistics on the number of deaf prisoners in the UK.

The main focus of the programme became a deaf prisoner who had spent many years in prison and had been freed only a few years earlier. He was interviewed anonymously. Like Garcia, he told us he was unable to understand his trial – and upon being found guilty, the length of his sentence.

He reported being treated brutally by the guards in the prison. The biggest problem with being deaf, he said, was not hearing the guards speaking to him. If he asked them what they had said, it was seen as answering back, while if he didn’t hear them at all, they would presume he had ignored them. Either way, he would receive physical abuse in response.

The former prisoner had (as with Garcia) spent time in solitary confinement, in this case because he was diagnosed as being mentally ill after reporting hearing sounds in his head. He suffered immensely for this, but the sounds he had heard were, incredibly, later found to result from his tinnitus.

What became clear is that any problems a deaf person could be faced with in the outside world were magnified in a captive environment. Access did not seem to be anywhere on the list of priorities, and the Disability Discrimination Act (now the Disability and the Equality Act) didn’t seem to exist.

Our contributor seemed scarred by the experience, and only took part in hope that speaking about what had happened to him would help reduce the chances of it happening to anyone else.

Let’s hope that James Ridgeway’s article helps make more people aware of the problems deaf prisoners face, and above all, that Felix Garcia, who seems to be the victim of an extraordinary deception, finally finds justice.