First published in the May edition of the Hearing Times 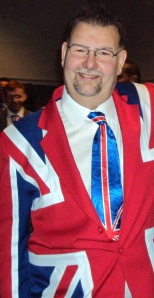 Joe Collins is profoundly deaf and has worked in the media for 25 years, including BBC2’s See Hear. He’s now setting up a promotions company, JC Promotions. I found out all about his work and his new project!

You’ve got a long history of being part of the deaf community – are your family deaf?

I have never known anything other than being deaf. My parents, brother and partner are deaf, my son Josh is hard of hearing and my three nephews are deaf! So being deaf and using British Sign Language is a natural part of my life. I have been actively involved in the Deaf Community all my life and it has taken me all over the world, after growing up in Oxford!

You’ve worked in the media for 25 years, who did you work for, and what was that like?

I started in London, working with the BDA on the London Deaf Video Project, before moving to the North East, where I co-founded Deaf Owl Ltd, which was the first deaf-run UK company to make videos and programmes for deaf people. I then worked on the programme Sign On in Newcastle, and eventually ended up back in London working for the BBC’s See Hear for 8 years. Since then I’ve worked with Remark! and other media companies on a range of projects.

What are the challenges of working in the media?

Working in the media is an amazing challenge. As a deaf person you’re constantly on the look out for new stories or interesting people that our audience would want to know about. What makes it worthwhile is people telling you they’ve enjoyed the programmes you’ve worked on!

What is your favorite film from those 25 years?

That’s a hard question! They’re all like my children! Producing short 60 second Deaf Awareness films for Deaf Owl is probably my favourite, because after they were transmitted, over 1,000 people contacted Tyne Tees asking for sign language classes. To be able to influence that many people was fantastic. Then there was a film I made for ‘See Hear’ about a deaf family being harassed just for being deaf. The film featured dramatic reconstructions including a fire engine and teenage actors! It was a challenge to pull the film together but I was very happy with it, because it was an important subject to highlight.

I noticed that there aren’t that many events for a large group of deaf and hearing people to get together, socialise and have fun. In the current economic climate, and with the Government’s spending cuts and Arts Council cuts, I think that it is vital that there is a social outlet for people to come together and enjoy themselves.

What is the ethos of the company?

I want to make sure that the events all are VISUAL. I want our events to provide an opportunity for deaf and hearing people to come together and enjoy a visual spectacle whether it’s dance, comedy, theatre, art or any other visual medium.

What is the first event you are promoting?

My first promotion is a concert by Signmark, who is a Deaf hip-hop rapper. His music is a unique blend of sign language, spoken English and music, over a strong hip hop music beat. He is well-known in Finland and has a recording contract with Warner Music. I thought it would be great to give UK deaf people here the opportunity to see them live!

His full name is Marko Vuoriheimo. Although he was born deaf, it was his childhood dream to become a musician and he’s now performed in 33 countries across the world. He’s even represented Finland at the United Nations, so he’s an incredibly positive role model! Hopefully the UK deaf audience will enjoy it!